An interview with Christine Skropke, Head of Public Affairs at secunet AG and Chairwoman of the Board of eurobits e.V. - European Competence Center for IT Security Bochum. 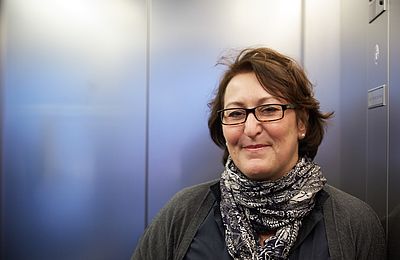 Christine Skropke talks about character traits urgently needed in IT, the industry's responsibility to improve its own image, and ways to get young women excited about IT.

IT now touches almost all areas of our lives - whether it's tracking packages or unlocking smartphones via facial identification. It is developing rapidly, constantly raising new questions, opportunities and challenges, and offering extraordinary perspectives for the future.

Despite the perspectives of an exciting professional life, the number of women studying computer science nationwide is less than 20 percent. Using computer science is something young women do just as naturally as young men, but far fewer dare to take a look behind the technology. With three Germany scholarships, secunet AG is specifically supporting female students of computer science and IT security at the RUB, thus sending a clear signal for the advancement of women in the industry.

Together with secunet AG, you have decided to support a total of three female students in computer science and IT security. What is your motivation behind this?
We are currently already in a war for talent, in the great challenge of really finding the talents, the skilled workers. This is not an issue that will come up, but one that has been with us for a long time. We will have to include women in order to find a broad field of experts in quantitative terms - that is one reason. But the second reason is that women look at the subject with a different lens and bring different skills to the table. My experience shows: Men are sometimes a bit more willing to take risks or experiment. Women are very well organized, but also very cautious. That's a trait that can be very advantageous in IT security. I am firmly convinced that women, with their "basic caution", but also with their communicative ability, bring a very, very important asset to the table here that has been neglected in IT in recent years. And that's why we're making a strong case for women.

While we're on the subject of diversity: The quota of women in IT is less than 20 percent nationwide. Are there any other reasons why diversity is so important in the IT industry?
We need diversity everywhere. In IT, in IT security just as much as in other industries. When you ask people on the street, "What do you mean by IT security?", they always think of the hackers under their hooded hats. There is still image work to be done, and I believe that we need to give IT security, perhaps not a different image, but a better one. Women want to take a targeted approach to a topic and change something, make a difference and help shape it. Through different approaches in mixed teams, we can develop much better technology, more user-friendly technology and, above all, technology made for people.

Coming back to the scholarship, what qualities of the students do you want to particularly recognize and support with it? We've just talked about the fact that women work a little differently, are a little more cautious perhaps....
It's precisely this cautiousness that we want to encourage a little bit. It's not about becoming daredevil, but more courageous and self-confident. What we want to encourage is that women feel comfortable in computer science, in IT security and in the natural sciences. That they develop a self-image that they belong there just as much as men their age and that we need all kinds of talent and knowledge in it. We need diversity, not just in the sense of diversity, but diversity in thinking.

Quite a few women still choose to study IT, but when they do, they are successful. Why do you think many girls and women underestimate their skills in this area?
I think it comes from role models, not just in families, but in society. I believe that we need many more role models. It is not fundamentally a scientific problem. Biology, for example, has always been a scientific subject where women were also involved in a normal way. It's really an image issue; it's not that women can't do it. A woman also values the environment she works in, and that's why we need to get IT security out of the basement. How we teach computer science starts in school, there are few touch points for girls and a "pigeon hole" thinking becomes entrenched. It's a long road to go down and we'll have to approach each generation differently.

We've already talked about role models and encouragement. What advice would you give to girls or young women who lack the courage to take a closer look at IT and IT security?
Take it one step at a time, get help, find sparring partners. I'm incredibly grateful to my colleagues at secunet, because I found mentors very quickly in my first days at work. I was very open about it and said that I didn't come from IT and they understood that immediately. The management level said "We're not going to leave you out in the cold here" and took the time to explain things to me. I think you need a circle of confidants where you get rid of the fear or inhibition of asking supposedly stupid questions - there are no stupid questions. That's how know-how builds up and you realize: oh, you're not really that stupid after all. It takes time, but we have to remain curious about the topics that come up and keep approaching them step by step with a little courage. In sports, too, you don't become a world champion overnight. Such a path is never easy, but if you don't start on it, it won't work out.

Thank you very much for talking to us, Ms. Skropke.

The interview was conducted by Charlotte Schab, Center of Computer Science.