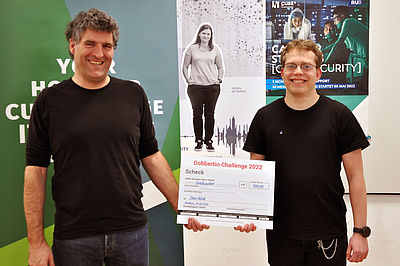 Mastering cryptographic challenges is the central task of the Dobbertin Challenge. The winner of this year's competition is Jens Alich, who is studying IT security in his fifth semester at the Ruhr University Bochum (RUB). Within six hours he managed to solve the task from the field of Symmetric Cryptography.

The Dobbertin Prize has been awarded annually since 2006 in memory of the well-known Prof. Hans Dobbertin. He was the founding director of the Horst Görtz Institute for IT Security (HGI) and held the Chair of Cryptology and Information Security at the RUB from 2001 to 2006. The Challenge is organized by a different chair each year.

Prof. Dr. Gregor Leander, deputy speaker of the HGI and head of the Symmetric Cryptography Group of the Faculty of Computer Science, and his team set the task this year. He presented the winner Jens Alich with a check for 300.00 Euros on March 3 in the Open Space of the MC Building. "It was a lot of fun for me to participate in the Challenge. I'll be back next year," summed up the winner. He would like to invest the prize money in his own server.