NRW Minister of Science Isabel Pfeiffer-Poensgen was given an insight into current IT security research at RUB. 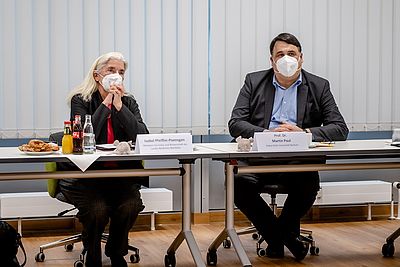 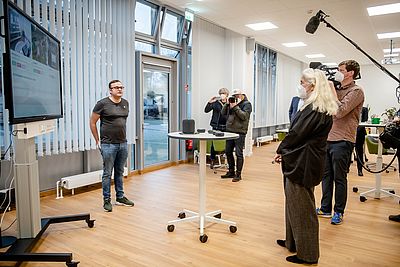 Whether it was the hacker attacks on the German Bundestag in 2015 or the cyberattack on a municipal IT service provider that paralyzed the transmission of the latest Corona figures for weeks in the fall of 2021: cyberattacks are becoming increasingly refined. That's why we depend on a secure IT infrastructure in a mobile, digitized society. On January 24, 2022, at the sixth stop of her research trip "#Möglichmacher", the Minister of Culture and Science Isabel Pfeiffer-Poensgen informed herself at the Horst Görtz Institute for IT Security (HGI) of RUB and the Cluster of Excellence "CASA: Cyber Security in the Age of Large-Scale Adversaries" embedded there about the diversity of cutting-edge research and what contribution it makes to a secure future.

Academic focus in top international and national research
"In the field of IT security, an academic focus in international and national top-level research has developed at the Ruhr-Universität Bochum with the HGI and the Cluster of Excellence CASA," Rector Prof. Dr. Martin Paul welcomed the minister to the campus. During a round of lectures, she was given an insight into the interdisciplinary research work and the development of Bochum as an ITS location and came into contact with the researchers. She was a guest in the building of "Germany's youngest computer science faculty," as founding dean Prof. Dr. Alexander May emphasized.

CASA spokesperson Prof. Dr. Eike Kiltz presented how young scientists at CASA, the only German Cluster of Excellence in the field of IT security, are researching sustainable countermeasures for the challenges of a digital future. One of these researchers is Thorsten Eisenhofer. The IT security researcher demonstrated to the science minister how voice assistants can be manipulated to perceive a hidden message and commands via audio signals. "We always have to be one step ahead in IT security research to highlight vulnerabilities in time and then also make companies aware of them," says Thorsten Eisenhofer.

"The institutes in Bochum are excellent examples of how scientists are changing people's lives in our state with their ideas and projects. Researchers from a wide range of disciplines pool their expertise here to work together on highly relevant social issues such as the safety of cloud-based voice assistants or systems for autonomous driving. The results and solutions they achieve benefit not only science, but also the people of North Rhine-Westphalia and beyond," summed up Isabel Pfeiffer-Poensgen during her visit.

To the film about the visit

About the research trip
On her research trip "#Möglichmacher," Science Minister Isabel Pfeiffer-Poensgen visits eight sites of cutting-edge research throughout North Rhine-Westphalia. A film team accompanies the visits and presents the respective research institutions and their focus areas. At the RUB, the filming took place at the HGI. Among others, HGI spokesperson Prof. Dr. Tim Güneysu, junior scientist Thorsten Eisenhofer and CASA spokesperson Prof. Dr. Angela Sasse were involved.