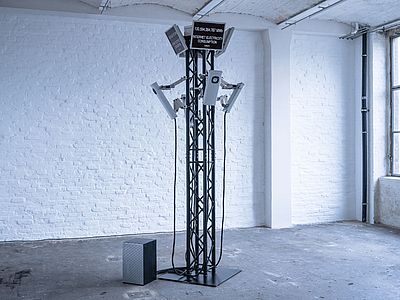 From an initial idea, within the framework of the artist residency, the artwork "APES" has been evolved, which deals with the digital evolution as well as the issues of IT security, data consumption, surveillance capitalism, disinformation and energy needs. Copyright: Marco Barotti. 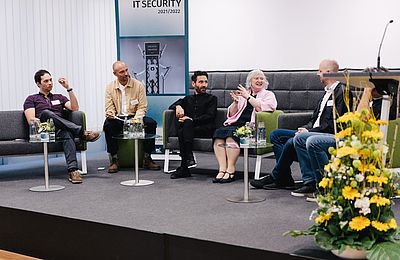 The researchers were able to gain a new perspective on their work during the residency. The participants of the panel discussion agreed that creative processes are similar in both disciplines. Copyright: RUB, Tim Kramer. 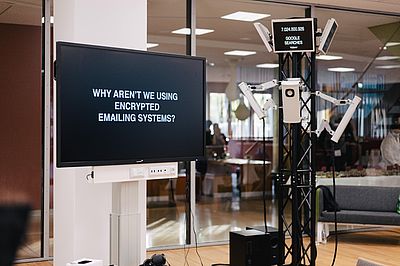 Video interviews with the researchers who are involved offer deeper insights into IT security research. Copyright: RUB, Tim Kramer.

It buzzes, rattles and hums, in between calls of apes can be heard: The artwork APES attracts attention even just because of its soundscape. But what do the four technical apes shaking a tower of trusses over two meters high and the screens lighting up above them have to do with IT security research?

Last Thursday, April 28, 2022, the closing event of the art-science residency "RE:SEARCHING IT SECURITY" was celebrated on the campus of the Ruhr-Universität Bochum (RUB) and the artwork created as part of the residency was presented. The artwork, titled APES, was created by Marco Barotti in collaboration with researchers from the Cluster of Excellence "CASA – Cyber Security in the Age of Large-Scale Adversaries", the Horst Görtz Institute for IT Security (HGI) and the Max Planck Institute for Security and Privacy (MPI). Over many weeks, they had met digitally and on the RUB campus to discuss research topics and visions for the future, work processes and goals. Topics of conversation, impulses and ideas around the themes of data protection, surveillance and digital evolution thus found their way into the artwork.

With "APES," a collection of kinetic sound sculptures emerged over the course of the residency: Four primates were made from recycled Wi-Fi sector antennas, attached to a 2 ½ meter high tower of trusses and controlled by algorithms. Screens above their "heads" show steadily increasing numbers on data consumption (e.g., from Google searches, emails sent, and tweets) and cybersecurity events. When the counters reach certain key values, the screens turn red and the sculptures emit apes calls. These calls were specially created by CASA researchers as deepfakes of real monkey calls for the artwork. Based on the idea of surveillance capitalism and data consumption, the apes are programmed to move according to patterns determined by these same numbers. Symbolic breaks from data consumption and exploitation occur when the artwork stops altogether: "Digital Wellbeing" then appears on the screens; another area of research that CASA researchers are working on. The sound sculptures are supplemented by video interviews conducted with the participating researchers during the artist residency.

Potential in the Field of Tension Between Art, Technology and Society

The researchers also had their say on the evening of the presentation and reported in a panel discussion on how the exchange with Marco Barotti had influenced their work. It was quickly concluded that IT security research also thrives on creativity and that creative processes are similar in both disciplines. They also talked about initial fears and reservations at the beginning of the project. The fact that such an exchange between art and science can also have a very formative effect in the long term was emphasized in particular by Professor Günther Meschke, Prorector for Research and Transfer, using the example of the city of Linz and the ars electronica that takes place there. Since 1979, the art festival has been promoting art in close connection with (digital) technology with a view to socially relevant issues. Fittingly, ars electronica is one of the next stops that the APES artwork will visit on its now starting journey to international art festivals.

Further information
To the artwork: https://www.marcobarotti.com/apes
To the project website: https://casa.rub.de/en/outreach/art-science-residency

About the artist
Marco Barotti is a media artist based in Berlin. After studying music at the Siena Jazz Academy, he began to combine sound with visual art. The focus of his work is on creating "technical ecosystems" that play with analogies to animals and plants. His artworks serve as a metaphor for the impact of human behavior on our planet and aim to raise awareness of ecological and social issues.