Within the framework of an art-science residency entitled "RE:SEARCHING IT SECURITY", an intensive collaboration between the HGI and media artist Marco Barotti takes place. 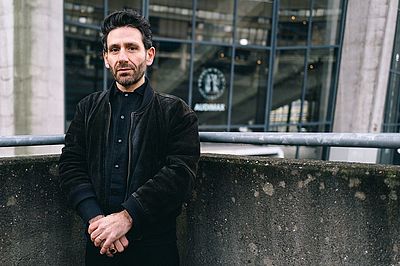 At first glance, art and IT security seem like two completely opposite worlds. Scientists of the Cluster of Excellence CASA and the Horst Görtz Institute for IT Security are currently exploring how the two disciplines can enrich each other. Within the framework of an art-science residency entitled "RE:SEARCHING IT SECURITY", an intensive collaboration with media artist Marco Barotti is taking place, through which an interdisciplinary work of art will be created.

Already last December, the art-science residency started with a first mutual acquaintance in a digital kickoff workshop. The actual residency phase, i.e. the period of exchange, began on January 17, 2022. Over a period of two months, there will be digital discussions, but also some visits by Marco Barotti on site at the RUB campus.

During this time, the scientists will gain a new perspective on their work by engaging with the art, questioning the familiar and the routine, and receiving creative impulses for their work. The artist, in turn, will gain insights into the diverse research topics, work spaces and experimental setups - into the researchers' way of working and thinking. After the residency phase, he will create a work of art that will give the viewers a new perspective on the topic of IT security. The finished artwork will be presented to the public in April. It is already clear that it will travel directly afterwards: Seoul, Linz and Berlin are among the stations of the artwork.

Marco Barotti and his concept "Apes" were selected in an open call. Beforehand, artists from all over the world had submitted their concepts to become "Artist in Residence" and to collaborate with the researchers from CASA and HGI. The scientists finally decided on the Berlin-based media artist. He is not only intensively involved with the topic of "sound", but also with the creation of "technical ecosystems", for which he works with plants and animals or technically recreates them. His works pursue the overarching goal of raising awareness of the impact of human activity on our planet.

For his first visit, Marco came to RUB to get to know the central research location of CASA and HGI and to take a curious look at the workspaces, laboratories and basement rooms with exciting experimental setups. Together with the researchers, he reflected on research areas, processes and goals, but also on personal matters: Where do you get the best ideas? How do you solve problems? What drives you? Why are you on the good side? What would the ideal future look like for you? Through each conversation, another piece of the puzzle is added that will influence the resulting artwork.