The cologne based artist designed the badge for the 9th IT Security Award, which will be handed over on November, 10, at the Ruhr-Universität Bochum. 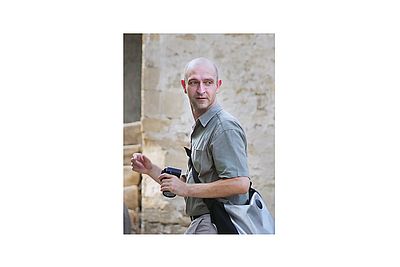 Codes have a reasonable importance when it comes to IT Security. In his works, the artist Reinhard Doubrawa demonstrates how they can be reinterpreted in an aesthetic manner. The cologne-based artist designed the badge for the 9th IT Security Award, which will be handed over on November, 10, at the Ruhr-Universität Bochum. The winning team will be awarded with a prize of 100.000 Euro and the artist’s work. The registration for the event is now open.

Made of stainless steel, the disc shows a homogeneous, freely designed pattern of strokes and arcs that offer recipients room for their own associations. The shapes cut out of the material fill the disc right up to its edges. They are based on the typographically modified letter of the word “PROTECTED“.
In this interview, the artist reveals how he approached the design of the award.

Mr. Doubrawa, what sign have you noticed today?
The effect of signs, in terms of reduction or aggregation of communication units, happens on the sidelines. I certainly have already perceived and decoded an incalculable number of signs between getting up and having breakfast - without having noticed any of them, i.e. without consciously experiencing a single sign.
Today, however, a redirection sign newly erected in front of my studio caught my spontaneous attention.

Your work focuses also on codes, which are known to play a crucial role in IT security. How has your focus on the subject of signs and codes arisen?
I'm concerned with the question on what my conception and, even more, my sensation and experience of a true reality is based. Has this reality a general validation? The meaning of signs is only given by agreements in out communication, i.e. the codes. These agreements, however, are permanently renegotiated and modified by us.
Whenever we deal with a sign, a new one emerges behind it. My point is this: I live in a world of signs, and express myself through signs.

What do you associate with cyber security?
The media keep suggesting me that I have to be involved in this, that I have to know “something“ about it, and that I have to act. However, I do not know exactly what cyber security is in practical terms. As a user of the World Wide Web, my experience takes place on the interface of communication; it focuses on content. As far as I am concerned, the processes that take place in the background are hiding in the twilight zone for me. But I am interested in the question how the interrelationship between freedom and security in the context is influenced by these background processes.

Which approach did you take to designing the prize for the 9th German IT Security Award?
The twililight zone I described earlier, is a zone that is beyond my perception. I have no feeling for it that would give me any certainty of orientation. I visualized my irritation about this in a simple letter pattern, which is formed by separations of a term into syllables and by rotation and mirroring of these syllables.
At first glance, it is not obvious. However, deciphering the code can be achieved by anyone who is familiar with the system of Latin letters.

Is there anything that was particularly important to you in the design?
It was simply important to me that the award winners receive a certificate that has a trace of the unknown, of the uncertain.

Vita Reinhard Doubrawa
Reinhard Doubrawa's art work spans a variety of media and genres. He addresses questions about the genesis of meaning in the context of everyday signs and codes. His work moves predominantly in the area between language and image.
Doubrawa, born in 1963, studied at the Kunsthochschule Kassel and the Kunstakademie Düsseldorf from 1990 to 1995. He completed his studies in 1995 as a master student of Urs Lüthi. His works are shown in galleries and museums throughout Europe. Doubrawa lives and works in Cologne.

High-ranking speakers at the Cybersecurity Innovation Conference
Bitkom's Cybersecurity Innovation Conference flanks this year's award ceremony. Speakers there will include Dr. Markus Richter, State Secretary at the Federal Ministry of the Interior and Community and Federal Government Commissioner for Information Technology (CIO Bund), and Julia Herrmann, Head of Security Architecture and Cyber Defense at Giesecke+Devrient. Other high-ranking representatives from business and research will speak on six panels on topics such as network and infrastructure security, hardware security and artificial intelligence security. Parts of the event will take place online.

The detailed program and a registration form can be found here.

Press contact
Christina Scholten, Public Relations Officer at the Horst Görtz Institute for IT Security, Tel: +49-(0)234-32-27130, E-Mail: christina.scholten(at)rub.de
Further information can be found at www.deutscher-it-sicherheitspreis.de and at www.hgi.rub.de.