If a person was affected by Covid-19 or not influences the attitude towards contact tracking apps like the Corona Alert app. 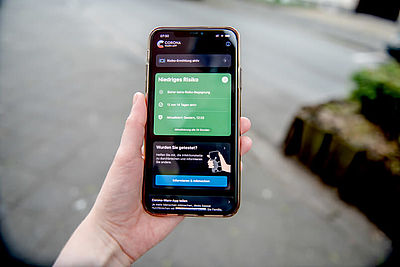 The official Corona Warning App of the German government has already been downloaded several million times. IT security experts from Bochum have investigated which factors ensure public acceptance and which technologies people in Germany reject. Shortly before the app was rolled out, they surveyed 1,200 participants in a representative online study. The results were published by the team from the Cluster of Excellence Cyber Security in the Age of Large-Scale Adversaries, Casa for short, and the Horst Görtz Institute for IT Security at the Ruhr University Bochum together with colleagues from the Max Planck Institute for Cyber Security and Privacy on 29 June 2020 on their website.

The Corona Warning App is designed to help prevent the spread of Sars-Cov-2 by simplifying the contact tracing of infected persons. Even before the app was available, the researchers from Bochum asked people about their attitude to contact tracking apps.

Of those respondents whose social circle included someone who had already tested positive for the coronavirus, around 50% would have been interested in using a contact tracing app. The scientists not only asked about the official Corona Warning App, but also about other types of contact tracking apps, for example applications with high battery consumption or those opening contacts to the public.

The willingness to use the app varies depending on various factors such as the type of data to be collected and to whom the data is transferred.  "Acceptance was significantly higher among people who themselves had already tested positive for the corona virus," says Prof. Dr. Markus Dürmuth from the Mobile Security work area. Two thirds of these respondents could imagine using a contact tracking app. "Personal experience with the virus therefore plays a major role in the acceptance of the app," the scientist continues. " Conversely, advertising should therefore be directed at people with less exposure to the pandemic.

The study also showed that the acceptance of contact tracking apps is significantly higher in the German population than for other types of corona apps - for example, for quarantine monitoring or for the purpose of digital proof of health.

As the team found out, data protection and data security measures of the apps have an influence on the readiness for use. For example, people are increasingly sceptical about Corona apps if position and health data are to be collected in addition to encounter data. Moreover, significantly more people are willing to use such apps if the data used does not allow any conclusions to be drawn about the person. "Most respondents were generally sceptical about the transfer of data, especially when it came to passing it on to the police, private companies or the public," explains Dr. Martin Degeling from the Chair of System Security. "It would therefore be advisable for the German government to pass a law that would strictly limit the purposes of using the app."

With follow-up studies in the USA and China, the researchers hope to gain an even more extensive understanding. "With the study, we want to find out in different countries at different points in the course of the pandemic which factors could have an influence on usage behavior and acceptance of the apps," explains Markus Dürmuth. In Germany and the USA, the current rollout of a contact tracking app is a novelty - in Asian countries, however, such apps have been in use for a long time. "However, they are often based on technical principles that would be unimaginable in the EU for data protection reasons - for example, the simple use of GPS signals sent to a centrally stored server," says Dürmuth. The team intends to further investigate the influence of these different conditions.