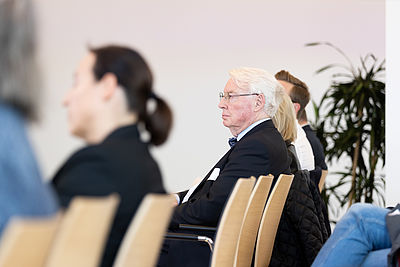 Horst Görtz and other guests during a keynote. Copyright: HGI, Schwettmann 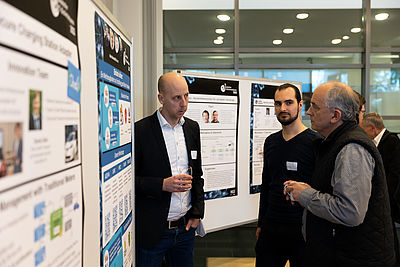 The award winners will explain their concept in a poster session. Copyright: HGI, Schwettmann 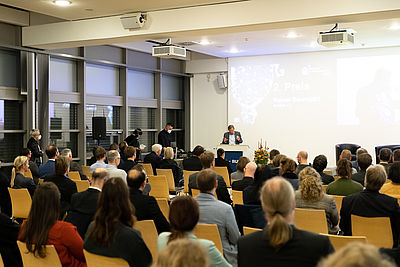 Rainer Baumgart (Secunet) during his laudation for the 2nd place. Copyright: HGI, Schwettmann 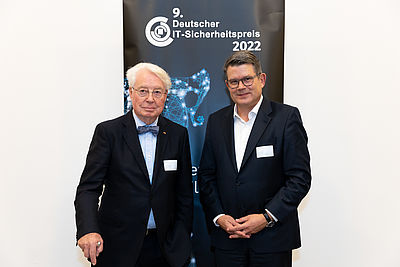 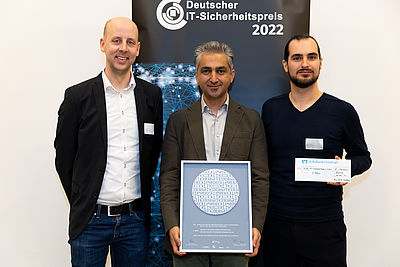 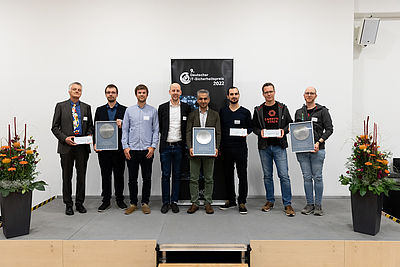 All winner teams of the 9th german it security award. Copyright: HGI, Schwettmann

Yesterday, Thursday, 10.11.2022, the winners of the 9th German IT Security Award were selected in Bochum. The first prize of 100,000 euros was awarded to the concept "Simply Secure: A Toolbox for Automated Generation and Evaluation of Protected Hardware" by HGI scientists David Knichel, Amir Moradi, Nicolai Müller, and Pascal Sasdrich. Second place went to the team "Morphing Attack Detection (MAD)" by Christoph Busch, Christian Rathgeb, Ulrich Scherhag, Daniel Fischer, Siri Lorenz, and Juan Tapia. They were awarded 40,000 euros for their work. The concept "Carbyne Stack - An Open Source Secure Multiparty Computation Cloud Platform" by Sven Trieflinger, Sebastian Becker, Vadim Raskin, Volker Suschke, Vincent Rieder, Jared Weinfurtner and Hanna Modica won 20,000 euros for the third place. The German IT Security Award was founded in 2006 by the Horst Görtz Foundation and is one of the most prestigious awards in the industry.

"The award winners have developed convincing and innovative solutions for an important IT security problem of high quality. Furthermore, they have submitted a convincing plan to make these innovations available to the market, thus to the real world," said Prof. Michael Waidner (ATHENE), chairman of the jury, as a reason for the decision for the award winners. The award, designed by artist Reinhard Doubrawa, was handed over at the Ruhr University Bochum's Convention Center. "We are really surprised," said award winner Prof. Amir Moradi happily after receiving the award. "Especially for the PhDs, who are still at the beginning of their research careers, it is a great success. I am very proud of the whole team."

With their concept, the winners want to improve the security of hardware circuits Hardware. Security-critical Hardware is used in almost every device in our everyday digital lives. For example, the EC card is built with a chip based on cryptographic hardware. Criminals can gain access to sensitive data on the card by using a so-called side-channel attack, which allows them to obtain information on cryptographic keys to break them. "Designing side-channel-resistant circuits requires a lot of expertise, time, and money," Waidner explained in his laudation. "As a result, most circuits are designed without side-channel resistance. The award winners developed a set of tools that can be used to efficiently analyze and verify circuits for their security against side-channel attacks on the one hand, and to make them resistant to side-channel attacks in a fully automated way on the other hand," Waidner said. The team provides these tools via GitHub for research and teaching purposes and aims to support developers in companies in designing secure hardware circuits easily in the future.

The "Morphing Attack Detection (MAD)" concept of the 2nd place winning team focuses on so-called morphing attacks. These are increasingly used by criminals to manipulate passports as documents for identification control: With a morphed image, they can obtain a passport - and have thus created a false identity. In automated facial recognition, as used at airports, these morph passports are frequently undetectable. "Morphing Attack Detection (MAD)" is a detection technique that uses a combination of features from textures, noise patterns, or geometries in a photo image to identify these morph passes.
The project, "Carbyne Stack - An Open Source Secure Multiparty Computation Cloud Platform," builds on cloud-native technologies that enable end-to-end encryption of data through secure multiparty computation. Companies can use the service to securely outsource computation with sensitive data. A total of 54 concepts from scientists and IT security experts from all over Germany were submitted for the award. The ten finalists presented their concepts in a poster session during the event before the jury finally announced the winners.

Minister of the Interior Faeser wants to strengthen cybersecurity research

The patron of the event, Nancy Faeser, Federal Minister of the Interior and for Home Affairs, addressed the guests in a video message. "The threat situation in cyberspace is growing every day," the minister urged in her speech. A multifaceted view on IT security is needed, especially in the context of hybrid threats, she said. Scientists would contribute by building bridges between innovation and research, as well as industry and start-ups.
In her message, Faeser was clear about the German government's political strategy: "We must and want to strengthen cybersecurity research. We want to strengthen digital sovereignty further and secure it in the future through good and close cooperation between applications and research." In this sense, the Federal Minister of the Interior warmly congratulated the winners.

The German IT Security Award aims to foster IT security concepts and solutions "made in Germany" in particular, contributing to strengthening the innovative power of the German economy. "I would like to see a clever idea for IT security in Germany that enables companies to stay ahead of the hackers," said Horst Görtz, who attended the award ceremony in person. He is convinced that IT security in Germany is highly developed. "But IT security is only as good as those who use it," he added. Preceding the award ceremony, Bitkom organized the 2nd Cybersecurity Innovation Conference in cooperation with Fraunhofer SIT, ATHENE, Digital Hub and Ruhr University Bochum, Horst Görtz Institute for IT Security, and Cube 5. At the digital conference in the morning, the participants were able to follow exciting panels around topics of IT security online. Among others, Dr. Markus Richter, State Secretary at the Federal Ministry of the Interior and for Home Affairs and Federal Government Commissioner for Information Technology (CIO Bund) held keynotes. During the afternoon program, which was broadcast live from Bochum, Rainer Baumgart (Secunet), Prof. Angela Sasse (HGI), Thomas Caspers (BSI) and General Setzer (CISO BW) discussed the topic of "Innovation in and for Germany as a cyber security location".

After the award ceremony, numerous guests, speakers, and award winners took the opportunity to end the day together in a relaxed atmosphere over dinner.

You can see more pictures of the event on the page of our photographer Michael Schwettmann.