The researcher is an expert in blockchain security, especially for Bitcoins. He came across this focus rather by chance through a newspaper article. 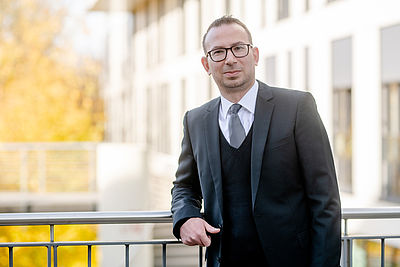 In November 2021, Prof. Dr. Ghassan Karame joined the Faculty of Computer Science and the Cluster of Excellence CASA (Cyber Security in the Age of Large-Scale Adversaries) at RUB. The native Lebanese was previously head of the security research group at NEC Labs Germany in Heidelberg. Due to his extensive industrial experience, nearly 100 granted patents are in his name.

For Karame, not only the move from industry to the university is something special, but also the circumstances of his appointment at RUB remain permanently in his memory: “I was the last newly appointed professor to receive his certificate from the outgoing rector Axel Schölmerich – at the same time, the then future, now acting rector Martin Paul was also present in an adjacent room. That was a very special honor for me.“

Asked about what his research interest is based on, Karame tells this story:

“In 2011, I read several media articles about Bitcoin, as I was quite curious about the underlying system. One particular article caught my attention at the time: bitcoins were being accepted as payment at a fast food restaurant in New York. I wasn't particularly surprised by the fact that people were using Bitcoin for real payments. However, my biggest surprise was that Bitcoin – which takes almost an hour to confirm a transaction – was used to process fast payments. This is because there is a security risk because of the long settlement time; for example, double spending can occur. For research purposes, I bought 10 Bitcoins with 5 Swiss francs together with colleagues at that time – and I remember thinking: these Bitcoins are really expensive. Nowadays, we know how expensive they really are! Our subsequent paper was published at ACM CCS 2012, one of the most prestigious computer security conferences. We also proposed a countermeasure to enable fast payments with minimal risk of double spending. Our countermeasure was eventually integrated into Bitcoin XT and is used by millions of users worldwide. From that point on, I became involved in researching the security of Bitcoin and other blockchains.“

What is a blockchain?

A blockchain is a decentralized database that holds records of transactions. Multiple records make up a block, which is added to the blockchain chronologically. Images of the blockchain are stored on numerous servers, the nodes, and can be matched. Manipulations are thus hardly possible. This is what makes the technology so interesting for sensitive transactions. The idea for blockchain technology originated with the digital currency Bitcoin.

At RUB, Karame will work in interdisciplinary teams to design and analyze protocols that ensure the security of digital platforms against attacks, but also protect the privacy of users accessing various platform services. To this end, his research area will not only network within the Faculty of Computer Science, at the Horst Görtz Institute for IT Security and in the Cluster of Excellence CASA, but also across disciplines – for example, with researchers from law or humanities on ethical and legal implications of blockchains and machine learning, as well as with colleagues from the Faculty of Mathematics in research on specific classifiers in artificial intelligence (“robust by design“).

Ghassan Karame, born in 1982, studied Computer and Communications Engineering at the American University of Beirut in Lebanon from 2000 to 2005. After receiving his bachelor's degree, he pursued his Master of Science in Information Networking at Carnegie Mellon University until 2006. From 2007 to 2011, he completed his PhD at the Swiss Federal Institute of Technology in Zurich (ETH) and then worked as a Postdoc. In April 2012, he moved to NEC Laboratories GmbH in Heidelberg, Germany. In teaching, he gained many years of experience as an adjunct professor at the Universities of Nicosia (Cyprus, 2015 to 2019) and Mannheim (2013 to 2021).