The wide-reaching YouTube channel "Einführung in die Kryptographie von Christof Paar" has made it into the most popular German-language podcast. 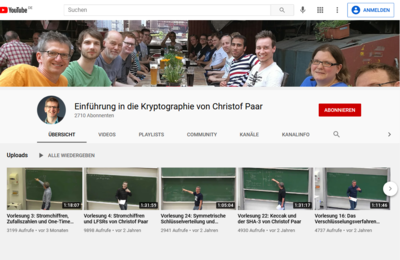 Every week, comedian Felix Lobrecht and comedy writer Tommi Schmidt discuss a wide variety of topics between everyday phenomena, life hacks, pop culture or even politics in their podcast "Gemischtes Hack". In 2020, the podcast reached around 1.1 million listeners a week (77 percent of them in the 14 to 29 age group), landing it at No. 1 in the Spotify charts in Germany. In addition, "Gemischtes Hack" is the only German-language podcast in the top ten of the global Spotify ranking.

In the current episode #134, Felix Lobrecht reports that he has recently become interested in the topic of cryptography due to a documentary about Operation Rubikon. During his research, he came across Christof Paar's lectures on YouTube. Since then, he has been learning about encryption methods, and jokingly calls himself "Doctor of Cryptography“.

Paar's lecture series for first-year IT security students has enjoyed a high level of attention on the web for quite some time: With nearly 45,000 international subscribers to his channels, his content is watched around the world.