The newly appointed professor of implementation security is aware of the danger to which private data in ID cards, bank cards and co. are exposed. 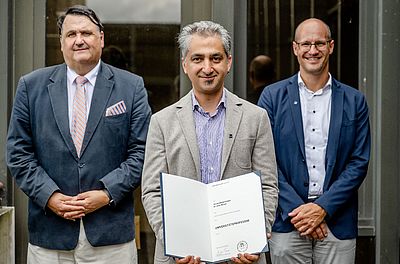 Today, many everyday objects such as ID cards, bank cards and car keys are based on logical functions implemented by digital logic circuits. "Their integration into our lives means that the objects have access to our private and secret data," explains Prof. Dr. Amir Moradi. He is researching how to protect this data at the Faculty of Computer Science at Ruhr Universität Bochum (RUB). Moradi was appointed as a professor for implementation security on August 1, 2022.

Error-prone implementation
One way to protect data in everyday objects is with cryptographic methods. But they are not sufficient on their own. That's because physical properties – such as power consumption – and circuit behavior can also allow conclusions about private data. To be sure, there are ideas for effective protection mechanisms. "But correct and efficient implementation usually requires manual intervention, accompanied by many years of experience in hardware design and physical security," Amir Moradi knows. "For this reason, design and implementation of protected hardware is often error-prone."

Automatic technique should provide more security
Moradi is therefore researching automated production of protected hardware and software designs. He is developing tools for inexperienced engineers, software programmers and hardware designers. They will help them add secure cryptographic circuitry to an unprotected design – such as a new car key. The tools will be designed in such a way that they can also protect individual components of systems, and that the totality of those protected components will also be secure.

"Regardless of the expertise of the engineers, the tools would help any company integrate protected cryptographic modules into products," Amir Moradi concludes. "Hopefully, that would lead to a reduced number of vulnerable gadgets on the market that affect the security and privacy of citizens."

About the person
Amir Moradi studied computer engineering in Tehran, where he received his PhD from Sharif University of Technology in 2008. In 2009, he joined RUB as a postdoctoral researcher in embedded security, where he completed his habilitation in 2015. In April 2021, he followed an associate professorship at RUB; in October of the same year, he accepted an appointment at the University of Cologne. Since August 2022, he is Professor of Implementation Security in Bochum; He is a member of the Cluster of Excellence "CASA - Cyber Security in the Age of Large-Scale Adversaries" and the Horst Görtz Institute for IT Security. Amir Moradi's publications have been honored with numerous best paper awards. In 2021, he set a record at the renowned  “Conference on Cryptographic Hardware and Embedded Systems (CHES)”: He was involved in ten of the papers accepted at that conference. In 2022, he will be involved in eight papers.